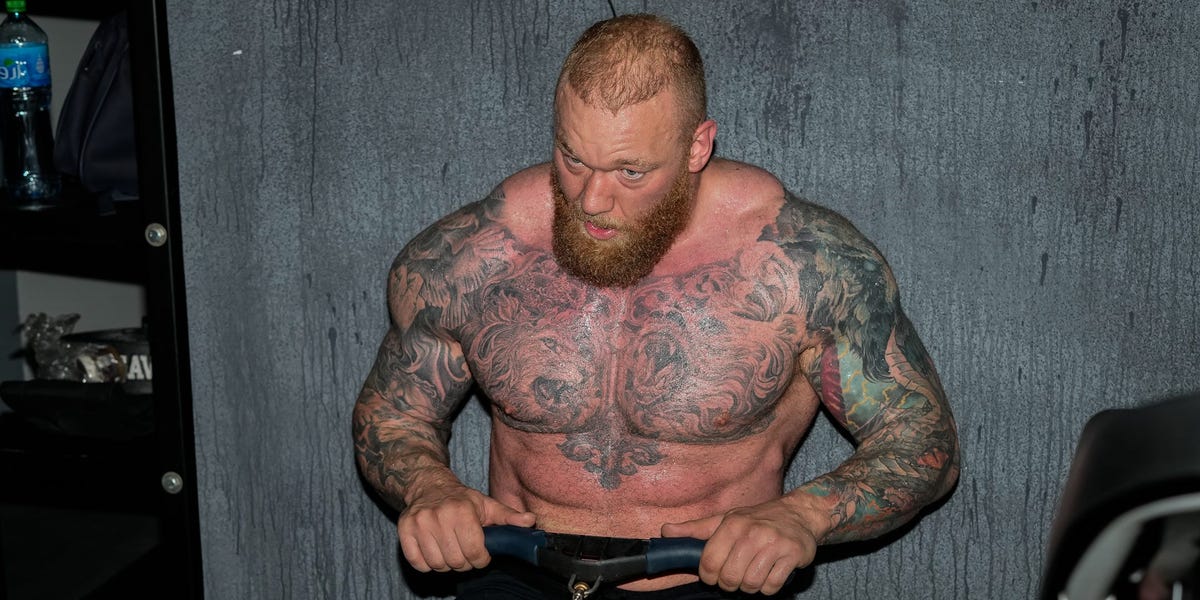 Hafthor “The Mountain” Björnsson has lost 121lbs over the past 18 months, revealing a shredded six-pack in the process.

The former Strongman and “Games of Thrones” actor is preparing to begin a new career in boxing, which required him to lose weight .

“The Mountain” told Insider that he does 300 sit-ups a day to maintain his rippling abs and keep his core strong.

To get in shape for boxing, Björnsson is training more than he did for Strongman, and as of 12 weeks ago, he’s stopped lifting weights altogether because he says he doesn’t need to get stronger.

Instead, he’s focusing on bodyweight exercises like burpees, pull-ups, push-ups, and sit-ups — and lots of them.

Björnsson has been doing 300 sit-ups a day for the past year or so, which means his abs are “always sore.”

“You have to have a very strong core for boxing,” he said.

When Björnsson first started doing sit-ups, he got cramps, he said. But his body soon adapted.

Björnsson performs various types of sit-ups, such as regular or butterfly (with the soles of the feet together and legs turned outwards), and often breaks the 300 up into sets.

And Björnsson has noticed a big difference in his abs as a result.

“My abs are super visible right now which is nice, they used not to be so visible,” he said.

Sit-ups alone won’t get you a six-pack if you don’t eat well, he said

Björnsson believes most people go wrong in their pursuit of defined abs by not paying enough attention to their diet — no matter how much you develop your abs, if you aren’t lean enough, they won’t show.

Losing fat on your stomach comes down to being in a calorie deficit, and you can’t choose which body parts lean out first, known as spot fat reduction.

Björnsson told Insider he doesn’t track calories but eats the same five high-protein meals a day every day. Once a week, however, he relaxes and has a cheat meal.

Björnsson does cardio and conditioning as well as bodyweight strength exercises

As well as hundreds of sit-ups, Björnsson’s training involves increased conditioning work and cardio to help him stay lean.

He prioritizes recovery too though, saying it’s key not to overtrain.

“You have to listen to your body, that’s super important,” he said. “I’m able to train twice, sometimes three times a day because I’m a professional athlete. But for someone that’s working 8-12 hours a day, that’s just impossible.”

Björnsson doesn’t recommend the average person starts doing 300 sit-ups a day, but perhaps starts with 50, three times a week, and then increase from there.