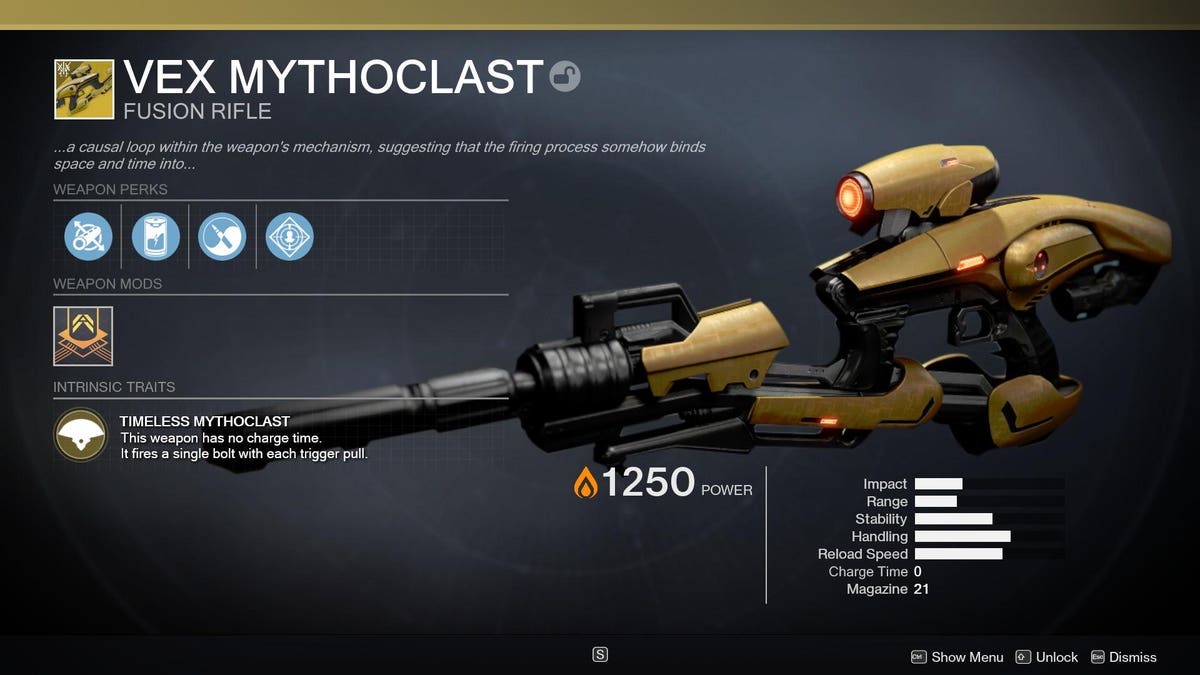 Another season of Destiny 2, another series of buffs and new mods that shift the meta once more. This time? While some things got buffed a little too hard and had to be disabled, there’s one weapon that seems to be sitting in a sweet spot, good enough to be pretty insane, but not “bugged” to the point where it’s disabled for one-shotting bosses or something.

That would be Vex Mythoclast, which launched last season with the return of Vault of Glass painfully underpowered. But it was buffed in quite literally seven different ways, and now paired with old armor mods and new seasonal mods boosting fusion rifles, it’s in a truly absurd spot.

It’s an infinite ammo primary weapon with huge damage and stability buffs from the last patch, synergy with elemental wells and charged with light builds and a further boost from the new Particle Desconstruction mod which stacks fusion rifle damage this season. Oh and it stuns unstoppable champions because why not.

The problem? Only a small portion of the community has it, and trying to get it is a massively frustrating experience, so much so, many players are accusing drop rates of being bugged.

According to Charlemagne tracking, only 0.6% of all Destiny 2 players have Mythoclast. Adjusted for more active players (ones with at least one seal), it’s just 1.6%.

Mythoclast drops only at the end of the Vault of Glass raid, and you can only go for it three times a week with three different characters. We are on week 16 now, meaning doing a raid on three characters a week is 48 chances. But today, we have many, many players who have gone 0-48, and are furious.

This is an old song and dance. We have gone through this with many RNG-based raid-exotics in the past, namely A Thousand Voices, Anarchy and Eyes of Tomorrow (people weren’t exactly thirsting over Tarrabah). Eventually, it got so bad that Bungie implemented “bad luck protection.”

The idea is that after each unsuccessful clear, your chance at getting the exotic drop will go up. The problem? We don’t know what the base rates start at, and how much they go up with each clear. But let’s say they start at 5%, and each clear makes that go up 1%. Well, in that case, that would mean here in week 16 for Mythoclast, we should be at 53%, over a previously stated notion that this would cap at 50%. And so getting Mythoclast at this point should have been effectively a coinflip for a few weeks now for the unluckiest of players.

Something is wrong here. One of two things is happening. Either this is bugged, and Bungie has previously stated drop protection was bugged back in the Eyes of Tomorrow days, but after “fixing” it, not that much seems to have changed. Or the other option is that it’s not bugged, but the rates are much lower than they should be. As in, maybe the chance started at 5% and only goes up 0.1% a clear, not 1%. So then after 48 clears we’d only be at a 10% chance still. In the middle, if it only goes up 1% per account, per week, we’d be at 21%.

Regardless, this is not working, and this has become an elevated issue lately because of how absurdly good Mythoclast is. It’s entirely possible that it goes through this entire seasonal/meta phase and people still don’t land it, and then it gets nerfed and no one gets to experience it in this very fun state.

Bad luck protection has never seemed like it’s working how it’s supposed to, whether bugged, or just not “protective” enough. It has been like this for more or less every RNG-based raid weapon so far, Eyes of Tomorrow still frustrating many DSC raiders to this day, even after “fixes,” and now the same is happening for Mythoclast.

You don’t want to make people run a raid until they hate it to land a single gun. Whether bugged or simply too low, this has to be addressed once and for all, because it simply is not working how it should.