The Hubble Space Telescope captured a stunning ‘Einstein Ring’ in the Virgo constellation that sits more than 65 million light-years from Earth.

This cosmic display, formally known as gravitational lensing, occurs when the gravitational field from a massive object in space warps space and deflects light from a distant object behind it.

It then results in a bull’s-eye pattern, or ‘Einstein Ring.’ It was predicted by the famed physicist, Albert Einstein, in 1915.

The image shows six luminous spots of light clustered at the center, four of which are forming a circle around a central pair.

The formation, however, only consists of two galaxies and a single distant quasar that is magnified as it passes through the gravitational field of the galaxies.

Scroll down for video 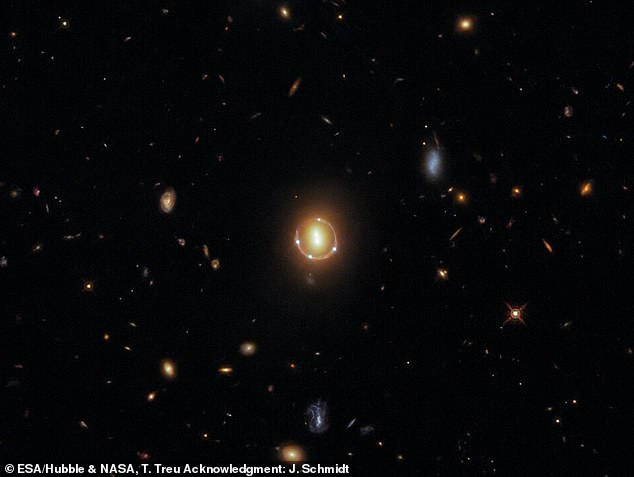 The quasar in this image sits farther away from Earth than the pair of galaxies.

A quasar is the extremely bright nucleus of an active galaxy and its powerful glow is created by the incredible amounts of energy released by gas falling toward the supermassive black hole at its center.

‘The light from the quasar has been bent around the galaxy pair because of their enormous mass, giving the incredible appearance that the galaxy pair are surrounded by four quasars — whereas in reality, a single quasar lies far beyond them,’ the European Space Agency (ESA) shared in a statement. 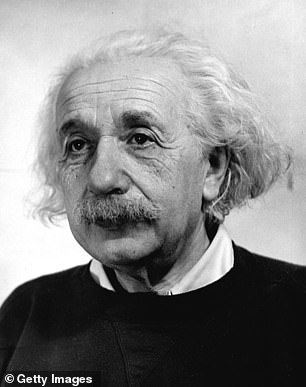 This cosmic display, formally known as gravitational lensing, was predicted by the famed physicist, Albert Einstein, in 1915

In 1915, the German-born Einstein claimed that gravity is the result of massive objects warping the very fabric of the universe, what he called spacetime.

Experts have since been able to test his theory of General Relativity within the solar system and prove his groundbreaking work holds up to scrutiny, which has been with hundreds of Einstein Rings.

Thomas Collett, of the Institute  of cosmology and gravitation at the University of Portsmouth, who discovered another Einstein Ring in 2018, said in a statement: ‘General Relativity predicts that massive objects deform space-time.

‘This means that when light passes near another galaxy the light’s path is deflected.

‘If two galaxies are aligned along our line of sight this can give rise to a phenomenon, called strong gravitational lensing, where we see multiple images of the background galaxy.

Hubble captured the recent Einstein ring this month in the Virgo cluster, which consists of some 1,300 galaxies.

Data from the telescope identifies a seventh spot of light in the very center, which is a rare fifth image of the distant quasar. 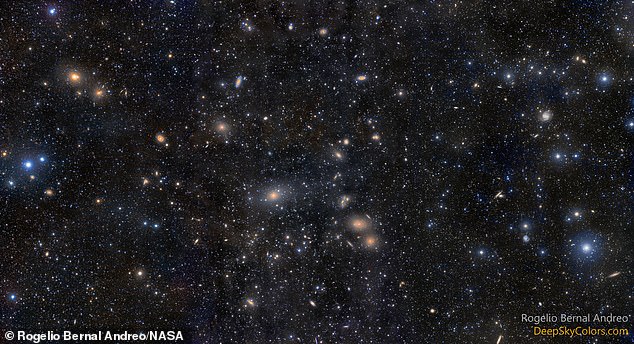 Hubble captured the recent Einstein ring this month in the Virgo cluster (pictured), which consists of some 1,300 galaxies

‘If we know the mass of the foreground galaxy, then the amount of separation between the multiple images tells us if General Relativity is the correct theory of gravity on galactic scales.’

Hubble captured the recent Einstein ring this month in the Virgo cluster, which consists of some 1,300 galaxies.

Data from the telescope identifies a seventh spot of light in the very center, which is a rare fifth image of the distant quasar.

A few hundred strong gravitational lenses are known, but most are too distant to precisely measure their mas.

This rare phenomenon is caused by the presence of two galaxies in the center that act as a lens.

Albert Einstein (pictured) published his General Theory of Relativity in 1915

In 1905, Albert Einstein determined that the laws of physics are the same for all non-accelerating observers, and that the speed of light in a vacuum was independent of the motion of all observers – known as the theory of special relativity.

This groundbreaking work introduced a new framework for all of physics, and proposed new concepts of space and time.

He then spent 10 years trying to include acceleration in the theory, finally publishing his theory of general relativity in 1915.

This determined that massive objects cause a distortion in space-time, which is felt as gravity.

At its simplest, it can be thought of as a giant rubber sheet with a bowling ball in the centre.

Pictured is the original historical documents related to Einstein’s prediction of the existence of gravitational waves, shown at the Hebrew university in Jerusalem

As the ball warps the sheet, a planet bends the fabric of space-time, creating the force that we feel as gravity.

Any object that comes near to the body falls towards it because of the effect.

Einstein predicted that if two massive bodies came together it would create such a huge ripple in space time that it should be detectable on Earth.

It was most recently demonstrated in the hit film film Interstellar.

In a segment that saw the crew visit a planet which fell within the gravitational grasp of a huge black hole, the event caused time to slow down massively.

Crew members on the planet barely aged while those on the ship were decades older on their return.