Skip to content
Technology
August 22, 2021 admin 0 Comments
Like everyone else, we are waiting to find out if Alder Lake can live up to the hype, and be a competitive product for all of next year—will it be all that and a bag of chips, in other words. A spattering of Alder Lake benchmark leaks have been promising, but not definitive. Part of the recipe for success, of course, is the chipset, and Intel is readying new ones well. How many, exactly? A whole bunch, apparently.

That’s according to a peek inside the latest Intel chipset drivers, which reference almost a dozen next-generation chipsets. These run the gamut from the H610E for entry-level laptops, all the way up to the X699 for Intel’s high-end desktop (HEDT) lineup. There will also be workstation, business, and embedded chipsets comprising the 600-series. 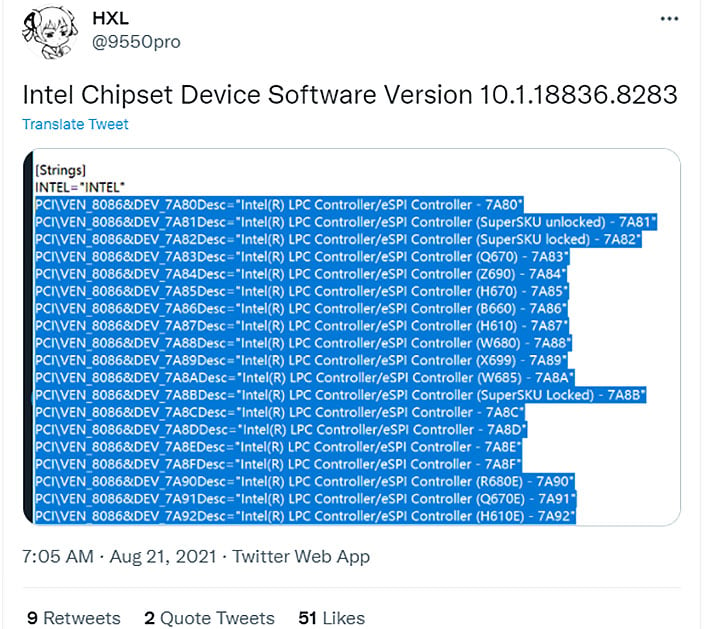 Kudos to @9550pro, a prominent leaker, for spotting Intel’s Chipset Device Software Version 10.1.18836.8283. Contained within it are 19 Device IDs attached to different Platform Controller Hubs (PCH) for Alder Lake. As to what exactly we are looking at, this is how its breaks down…

Laptop And Embedded (All)
Workstation
All of these chipsets are not likely to release at the same time, and instead will trickle out into the marketplace, depending on Intel’s launch strategy. Rumor has it Alder Lake will launch in October or November of this year, with the initial SKUs being higher end processors aimed at enthusiasts and power users. Then in 2022, we’ll see a broader release.
This is not something Intel really discussed during its recent Architecture Day 2021 event. However, it stands to reason that the Z690 chipset will arrive first, with the initial batch of high-end Alder Lake processors, like the Core i9-12900K.

Out of those listed above, the Z690, H670, B660, H610, and W680 will feature a new LGA-1700 socket design. It’s also worth noting that Alder Lake supports both DDR5 and DDR4 memory, though not in the same motherboard—supporting multiple RAM types in a consumer board is a trick we have not seen since ASRock’s 960GC-GS FX, which had slots for both DDR2 and DDR3 memory. Alder Lake also ushers in support for PCI Express 5.0.

Given that Alder Lake is now right around the corner and chipset drivers are already pointing to next-gen platforms, we imagine it won’t be long before leaked motherboard models hit the scene. It’s already happening to a small degree, with a recent benchmark entry pointing to an ASUS ROG Strix Z690-E Gaming WiFi motherboard. Others probably won’t be far behind.