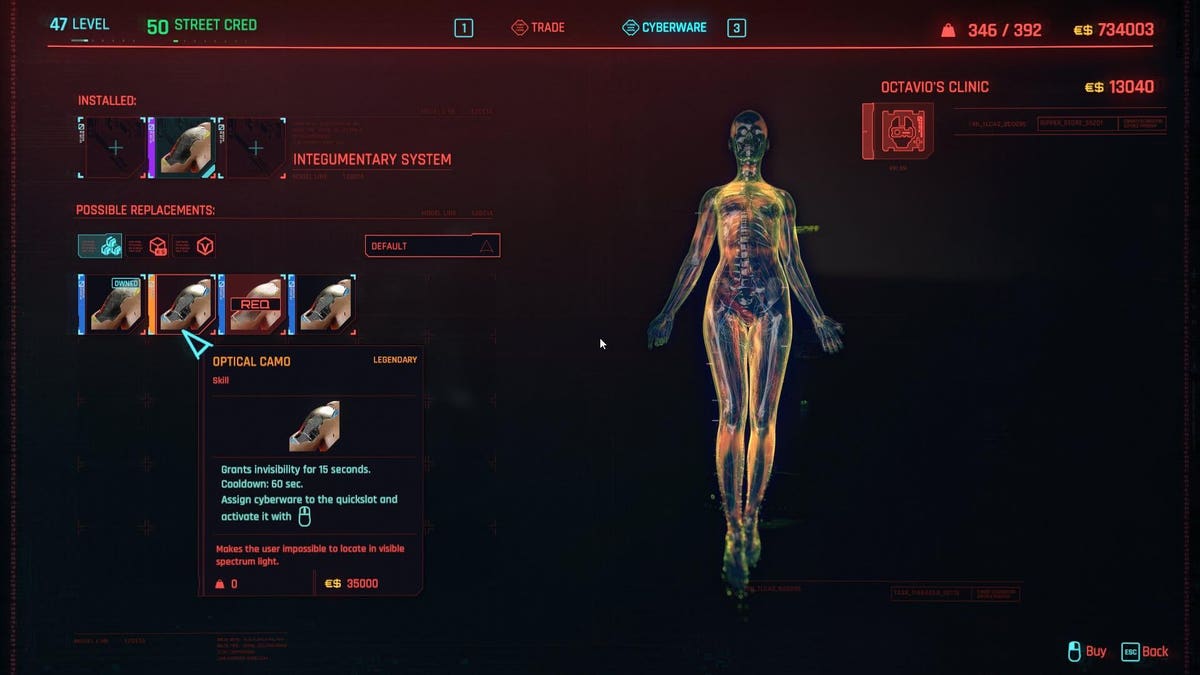 Cyberpunk 2077’s 1.3 patch introduced a few interesting things to the game, but the most interesting things were ones that CDPR decided they shouldn’t talk about or showcase at all on their livestream, because why would that make any sense?

But, it turns out that they are more interesting than any amount of free jacket or Johnny outfit DLC, and at least one has a meaningful impact on combat in the game.

I already went over the first secret addition in 1.3, the MaxTac armor set that is now lootable from Judy’s apartment after 1.3, the only place in the game you can get it (even if it’s not very good, it looks cool). Now, there’s another thing.

That would be optical camo, a new piece of Cyberware that has existed in the game files for a while, and could even be activated through mods, but now it’s officially available in the game for the first time. But it wasn’t announced on stream, and hell, it’s just a tiny single line out of hundreds in the patch notes.

Optical camo is what it sounds like, it grants you the ability to become invisible for a short period of time on a cooldown. Great for stealth builds, but also good for confusing enemies in open combat.

There are three levels of optimcal camo, rare, epic and legendary. And three different ripperdocs where you can find them. See the maps below:

If you’ve already been deep into the Cyberpunk story or endgame, there’s no reason not to skip directly to the legendary optical camo which is 15 seconds of invisibility every 60 seconds for $35,000, dramatically less than most cars in the game and an easy buy for any build.

Why wasn’t this featured or talked about as a new addition to the game? Or marketed as free DLC? My guess is that CDPR knew that everyone knew that this was in the game already, and they would have gotten flak for trying to pitch optical camo as “free DLC” if it was something that was in the game since launch and simply wasn’t available because of whatever technical reason. So they just activated it. Still, they could have at least spotlighted it for the stream. This and the MaxTac armor would have been more interesting than what they did show off.

I am still holding out hope that other bits of the free DLC still to come could be cyberware that we haven’t seen yet, but no word on that yet. And given that 1.3 just got here, it’s likely going to be radio silence for a while.