While the Play Store is generally the more accepting and pervasive of the two big mobile application platforms, it still needs a fair amount of moderation to keep out the riff-raff. Malware, spyware, annoying apps that put things like [Free Download] in the title, it’s all got to go. But it looks like Google is getting more aggressive in enforcing its more general developer terms, especially when it comes to payments. Case in point: Language Transfer.

This free and open-source app gives people access to audio courses on language learning. The tale of its removal and eventual reinstatement is chronicled by SyntaxBlitz on the Language Transfer Github page (spotted by Ycombinator). Previously the app included links to the project’s Patreon, which seems pretty reasonable, but technically violates Google’s stance against getting around the Play Store system for payments (and its lucrative cut of same). It was rejected upon initial posting. So the developers removed the links to Patreon, instead giving a generic link to the Language Transfer web page.

Google rejected the change and pulled the app from the Play Store. Why? According to the notes and screenshots submitted to the developers, it was because the linked Language Transfer site included options to support the project via Patreon and PayPal at the bottom of the page. Oof. 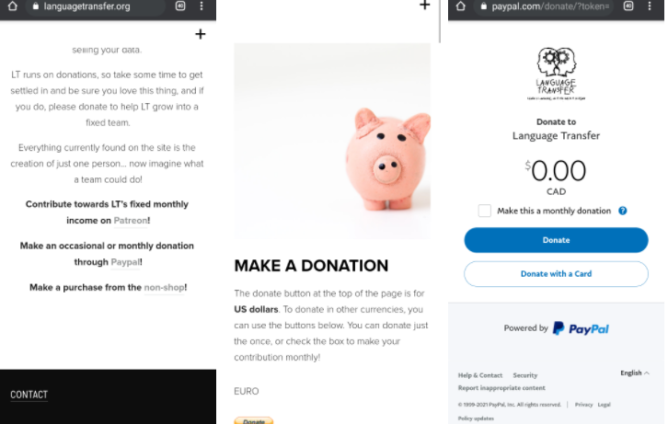 The developers tweaked the app once again, this time linking to an About page on the site (which features no direct links to donation options) and to the project home on Facebook. Google allowed this, and the app is now available for free on the Play Store. (the more general link is still appearing on the individual language pages.) But this little tale serves to illustrate Google’s attitude: it’s getting more aggressive in enforcing its exclusive access to payment processing on the Play Store, even as regulatory sharks are circling for just that behavior.