The Vega rocket is being prepared for the nineteenth launch of Europe’s small lift vehicle, the second Vega launch of 2021, as well as the seventh Arianespace mission of the year. Arianespace flight VV19 is scheduled to liftoff from the ELV launch pad at the Guiana Space Centre in French Guiana on Monday, August 16, at 10:47 PM local time (01:47 UTC on August 17).

On board is the 922 kg Pleiades-Neo 4 Earth observation satellite, part of a four satellite constellation of upgraded Pleiades spacecraft to be built and operated by Airbus Defence and Space to provide Earth imagery for customers worldwide. Pleiades-Neo 4 is joined by four secondary payloads from the European Space Agency and commercial operator Unseenlabs.

The Vega rocket’s first stage, an Italian-built Avio P80 solid rocket motor with a filament-wound carbon-epoxy (composite) casing, will ignite at T-0 with 3040 kN of thrust. The vehicle will quickly climb into the sky on a northbound trajectory from French Guiana toward a sun-synchronous orbit.

The motor will burn out almost two minutes after launch, and after stage separation, the Zefiro-23 second stage, another Italian-built Avio solid rocket motor, will fire for around 90 seconds. 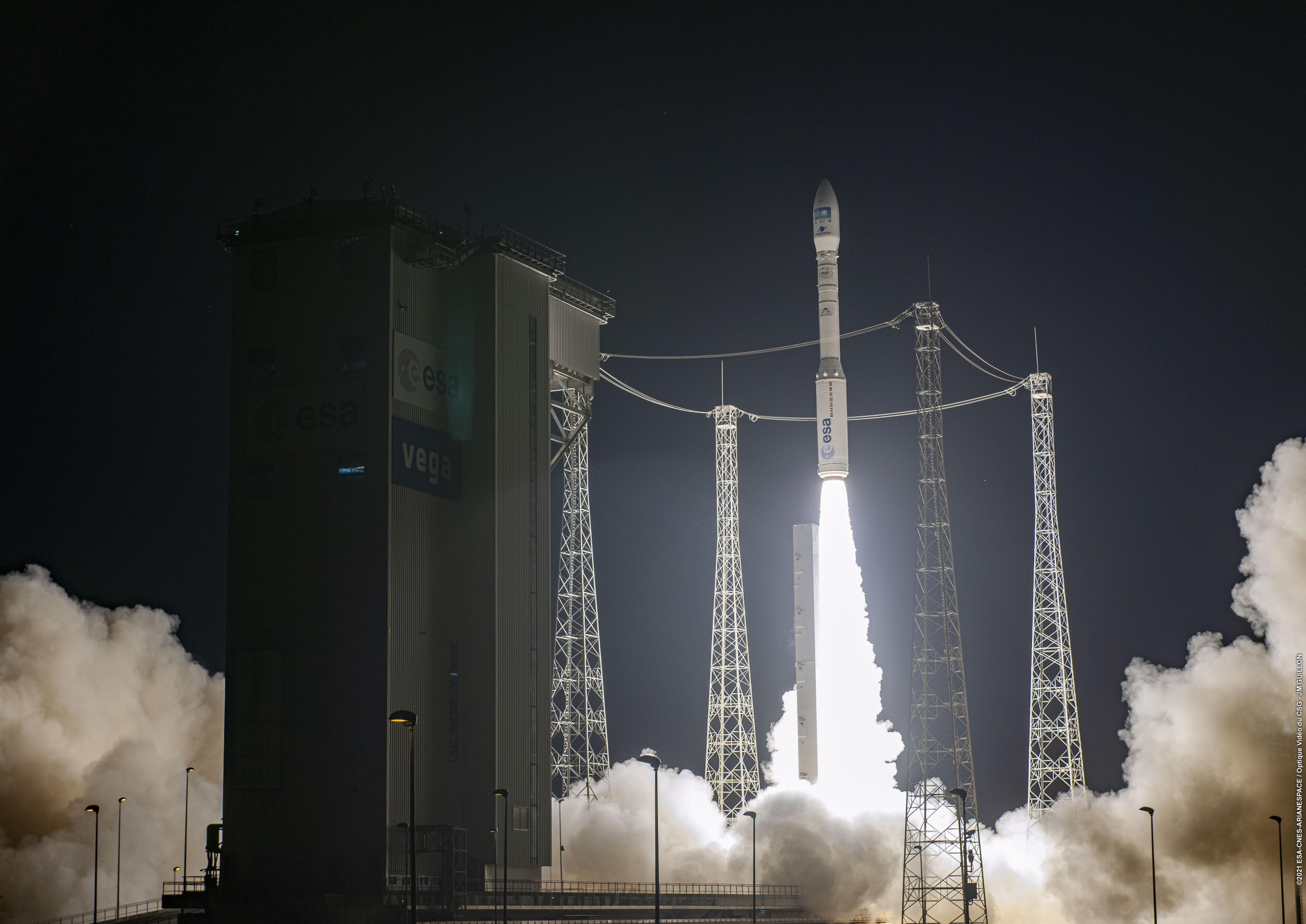 The solid-propellant Zefiro 9 third stage, also built by Avio, will ignite around three minutes and 50 seconds into flight, followed by fairing separation five seconds later. The Zefiro 9 will burn out and separate around six and a half minutes after liftoff, and the AVUM liquid-fueled fourth stage will start just after eight minutes into the flight.

Restartable up to five times, AVUM will place the Pleiades-Neo 4 satellite into its initial 614 x 624 km orbit, inclined 97.86 degrees to the equator, approximately 54 minutes after launch. The stage will then place the four secondary payloads into their own orbits.

The secondary payloads include three satellites for the European Space Agency and one for Unseenlabs. LEDSAT, an optical tracking experiment, RadCube for magnetic field and space radiation monitoring, and Sunstorm for solar X-ray flux monitoring are all being launched on behalf of the ESA.

The final secondary payload is Unseenlabs’ BRO-4 satellite for air and marine traffic surveillance. All four of these small satellites will be placed into a 540 x 554 km altitude orbit inclined 97.55 degrees to the equator. The VV19 flight will end with the fifth AVUM burn to deorbit the stage at T+ one hour, 44 minutes, and 59 seconds. 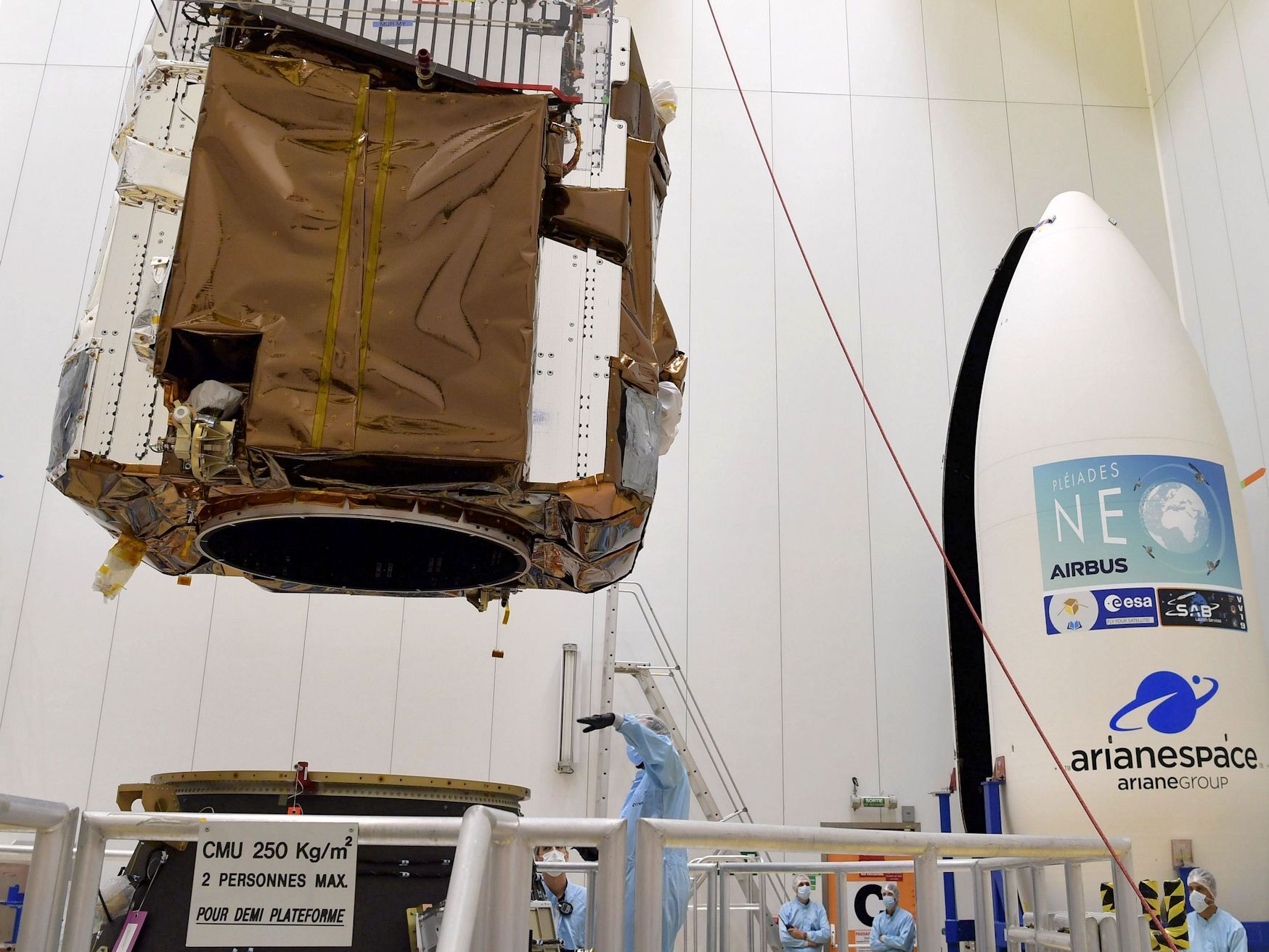 Pleiades-Neo 4 is the second such satellite to be launched this year after Vega returned to flight on the VV18 mission with the Pleiades-Neo 3 spacecraft in April. The Pleiades-Neo series of satellites is a follow-on to the first two Pleiades satellites launched early in the 2010s, which are themselves successors to the SPOT series of Earth observation satellites, the first of which was launched in 1986 by the last Ariane 1 rocket.

Pleiades-Neo 4 will be deployed 180 degrees away from its predecessor satellite, but on the same orbital plane, in order to facilitate the planned capability of revisiting each site on Earth twice a day. The satellites are intended to observe up to two million square kilometers per day.

The constellation also has an advertised capability to respond to urgent requests for imagery within 30-40 minutes in order to support disaster monitoring. The satellite is designed to have a lifetime on orbit of at least ten years.

The Pleiades and Pleiades-Neo satellites, their SPOT predecessors, along with others such as the Landsat series and smaller CubeSat-sized observation satellite constellations, have been observing the happenings on this planet for many years, and will no doubt keep Earth under a watchful eye for decades to come as the commercial imagery market expands its capability and reach.

The Vega rocket itself has been in service since 2012, and is now planned to be succeeded by the Vega-C. The successor will use a more powerful P120 solid motor for the first stage, also used on the upcoming Ariane 6 heavy lift vehicle. Vega-C is currently scheduled to debut no earlier than 2022.

After the VV19 mission, the original Vega has one more flight scheduled for 2021, along with two more flights later on. The new Vega-C is scheduled to launch the Pleiades-Neo 5 and 6 satellites starting in the second quarter of next year.