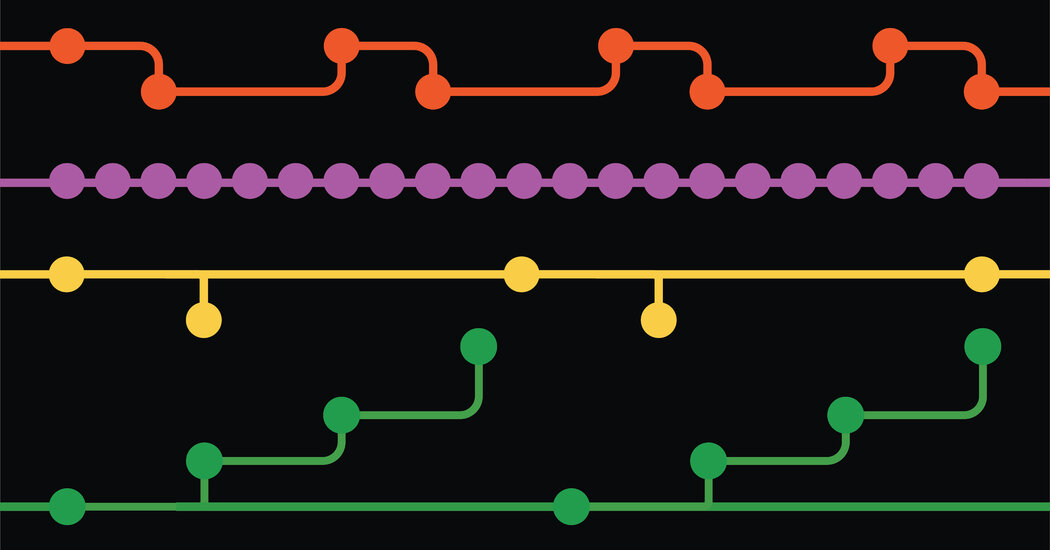 Montreal’s signature “doo-doo-doo” has the same intervals as the opening for Aaron Copland’s “Fanfare for the Common Man.”

In Budapest, a fleeting arpeggio sounds like a cheerful “ta-da!”

In New York, the downward jingle sounds like a marimba.

In London, the notes are so fast, they seem to blend together.

This train is about to depart. Please mind the door.

Ted Green has been collecting the sounds and sights of transit systems for more than a decade. He travels frequently for work, as a civil engineer, and in every city he visits, he rides the mass transit system and films video of the closing doors, replete with the announcements and the telltale chimes — beeps, ding-dongs, jingles and arpeggios that warn riders around the world to stand clear.

“I think the appeal is the simplicity,” Green said. “You wonder, how can there be so many different variations of beeps? And then you listen, and they’re all so different.”

Like many aspects of mass transit systems, door chimes may seem banal, the dull background track to daily commutes. If you listen more closely, though, you’ll notice regional patterns and distinctions.

For Green, recording videos of door closings started as a way to document his travel for himself, but he eventually compiled some videos on YouTube. He was shocked when one door-closing montage got more than two million views. He has made many more videos since; this past year, he’s noticed that there’s been a spike in viewership, perhaps because of nostalgia for train riding during global lockdowns.

“A lot of train enthusiasts are also collectors,” said Adam Rose, an audio designer who works on train simulations for Dovetail Games, and who consequently spends a good part of his day listening to transit chimes. “So looking for different transit chimes can almost be a form of collecting.”

Most chimes these days are computer generated, played automatically as part of the door-closing process. But some originally emerged from mechanical processes in older trains.

In Montreal, where the first metro trains were put in service in 1966, there was an electronic circuit called a current chopper, which worked to slow down the electronic frequency applied to the motor. It made a sound as the trains pulled out of the station: “doo-doo-doo.” “Metro cars act as a sounding board, and amplify the melody,” said Benoit Clairoux, a historian of Montreal’s transit system.

When the transit authority wanted to add a door-closing chime in 2005, they tested various sounds, though none was as popular as a chime that mimicked this mechanical sound. So executives added a synthetic “doo-doo-doo.”

“Three simple notes — ‘doo-doo-doo’ — that have become synonymous to Montreal, as much as smoked meat (sorry, New York!) and the Habs in hockey,” Clairoux wrote in an email. (The Habs refer to the Montreal Canadiens of the National Hockey League.) “Without these three notes, Montreal and its metro would not be the same.” (Many mistake the sound for the opening notes of Fanfare for the Common Man, a piece by composer Aaron Copland, but this is a coincidence, Clairoux added.)

In Rio de Janeiro, the jingle, in a minor key, sounds like an homage to bossa nova.

In Toronto, the jingle is a calming downward arpeggio.

In contrast, Vancouver’s vibraphone-like jingle is an upward arpeggio that seems to signal an arrival.

Hong Kong has announcements in Cantonese, Mandarin and English.

In Paris, a simple “A” note plays as the doors shut. This is also a throwback, a sound that mimics the vibrations of a mechanical part that is no longer in use on any of the system’s trains. “But for a half century Parisians and visitors alike became used to that sound, so we decided to keep it, and recorded a synthesized version,” said Song Phanekham, a communications manager for the Paris transit system. “It’s a tribute to the heritage of the Paris Metro.”

In Tokyo, each station has its own custom jingle to signal departures. In Rio de Janeiro, the subway’s door chime pays homage to bossa nova. In Vancouver, the doors still close to a three-note sound that was recorded in the 1980s on a Yamaha DX7. (“The hallmark of any mid-80s pop song,” said Ian Fisher, manager of operations planning at British Columbia Rapid Transit Company.)

Door chimes are part of a broader soundscape that can evoke something deeply specific to place and time. One Russian train enthusiast, who also collects transit videos, said that he finds station announcements and certain chimes to be reminiscent of a romantic, inaccessible past. “Being a native Russian speaker, I understand everything in St. Petersburg’s subway announcements,” he said. “When I ride through the Old Town and hear the names of the stations located there, I imagine that I’m a hero of a Dostoyevsky novel. I imagine that I’m in the 19th century, and if I get to this or that station I will see carriages, kerosene lamps and people in black suits and hats. So certain chimes can transfer me to another world, which feels amazing.”

Green, the civil engineer, says he doesn’t have a favorite among the many chimes he’s recorded, from Singapore to San Diego. But he does have a least favorite, which plays on New Jersey Transit, and which he has dubbed “the Alfred Hitchcock sound.” The most iconic, he thinks, is New York’s “ding-dong,” along with the announcement: “Stand clear of the closing doors, please.”

When it comes to designing a new transit chime, there is much to consider. Length, for one, especially given what is called “dwell time,” when a train is lingering in the station. “One of the biggest things about transit is just trying to get people to step lively on and off trains as the doors are about to close,” said Max Diamond, a New York City Transit conductor.” It seems to a layperson like a door chime is innocuous, but it’s a really critical part of keeping the capacity of the subway up.”

So, Diamond said, you wouldn’t want the chime to be too long, or it might slow things down further on an already overburdened transit system. On the other hand, according to Fisher, of the British Columbia Rapid Transit Company, it can’t be too short or people might miss their window of opportunity to rush out the doors. (New York’s two-note chime lasts just a fraction of a second, on the shorter side of transit chimes.)

In Delhi, the chime is a chirpy repeated sequence.

Tokyo’s jingle has a rhythmic pattern similar to that of Delhi.

In Paris, the sustained chime mimics the vibrations of a mechanical part.

In Berlin, the beeps are a steady pulse like an alarm clock.

Then there’s the question of how best to get people’s attention. A relaxing melody might fail to rouse slow-walking commuters from their daydreams, as they shuffle out the door. “You cannot use too gentle a sound, because to get hit by the door is not pleasant,” Phanekham said. “A nice musical sound with a harmony might be a false promise.”

But there is rider experience to think about, as people hear the chimes day in and day out, often during stressful parts of their day. Fisher said descending chimes might be more soothing than the upbeat sound of climbing notes. “If you just miss your train, hearing the ascending chimes is really aggravating,” he said.

Bruce Alexander, who was the senior director for the office of strategic innovation and planning for the Metropolitan Transportation Authority before he retired, was involved in fine-tuning New York’s signature “ding-dong.” It was introduced around 1970 for safety purposes, but originally, he said, there was too long a delay between the sound of the chime and the moment when the doors closed; it contributed to accidents as more people tried to rush to the doors. The M.T.A. cut the delay time down to zero, before eventually automating the chime process altogether.

Even given all these considerations, most commuters likely won’t notice the sound as they go about their days. “It becomes, like everything else, a part of the background,” Alexander said. “No matter how strong a signal is, eventually it’s going to disappear into the general cacophony.”

But sifting through this everyday din, listening closely to the notes and beeps and arpeggios that play as doors around the world open and close, the collectors of transit chimes are doing their best to ensure that the music doesn’t completely escape notice.