Razer has announced a new entry into its consumer earphone range, this time with the Hammerhead True Wireless Earbuds. They feature many of the staples you’d expect from a product of this kind, including long battery life, active noise canceling, and a nice charging case. They also have RGB, because this is still a Razer product after all. 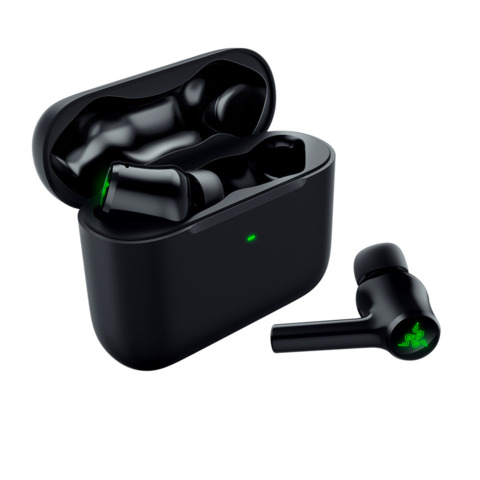 The Razer Hammerhead True Wireless Earbuds are available today from Razer’s website, retailing for $130. Orders will ship the next business day, with only a Black option available for now (previous models came in white and quartz pink, too).

The Razer Hammerhead True Wireless feature a design strikingly similar to the Apple AirPods, which is fine considering how great those are. They have a short stem that will stick out of your ears, with microphones pointing toward your mouth for clarity. The earbuds also feature dual microphones used for active noise canceling, which should do a decent job of identifying low frequencies around you and filtering them out accordingly. Razer says you can expect more than 32 hours of battery life from the earbuds thanks to the battery found in the case, which has a nice matte black finish with the familiar green Razer logo.

Two features of the Hammerhead are quite specific to Razer’s gaming roots. The earbuds feature Razer’s Chroma RGB, which illuminate the small logo on each bud. They’re small enough that it’ll probably be hard for anyone to notice them, but you’ll know they’re spitting out a rainbow pattern and that’s certainly what counts. Razer also says that the Hammerhead features only 60ms of latency, which will make it useful when paired with devices with an equally modern Bluetooth standard for mobile gaming.

Also announced today are a range of keyboard accessories that are on sale today, too. Similar to brands like Glorious, Razer is diving into the keyboard accessory market to give consumers easier ways to get niche items like braided cables and specialty keycaps. Its latest range, the Phantom Keycaps, are made of ABS plastic but feature a design that allows them to look sleek when not illuminated but also allow lots of light to diffuse through them on an RGB keyboard. It’s a nice look if you like to tinker with your keyboard’s look, coming in both black and white.

Additionally, Razer is offering a bundle with its PBT keycaps and new braided USB-C cables, which come in at a competitive $50 for the pair. They also come in a range of colors, from simple black and white to a neon green, pink, and more. Razer is also selling new keyboard wrist rests in a variety of lengths, with an understated design that means it won’t look out of place with most keyboards.

All of these accessories are available on Razer’s website today, with the Phantom keycaps retailing for $35, the PBT keycaps and braided cable bundle for $50, and the wrist rests starting at $20.