A lot went down at today’s Galaxy Unpacked event. From two new folding smartphones to the first Wear OS 3 smartwatch, Samsung brought a ton of news to its latest unveiling. In fact, if you weren’t paying close enough attention, there was one announcement that may have slipped right by you. WhatsApp has finally made it easy to bring your entire chat history between iPhone and Android devices.

Currently, WhatsApp users can sync their conversations to a new device using Google Drive backups on Android and iCloud backups on iOS. If you’re upgrading from Pixel to Pixel or iPhone to iPhone, this works without any major hiccups. If you’re looking to jump ship to another platform — whether it’s to or from Android — this update will allow you to do that without losing all of your messages, voice notes, and photos.

Want to securely take your WhatsApp history from one platform to another? We’re working to make this possible starting with @SamsungMobile devices, and it’s coming to @Android and iOS phones soon.

However, it’ll take some time to come to all users. In partnership with Samsung and its Smart Switch app, the Galaxy Z Fold3 and Z Flip3 will be the first devices that support transfers. So, if you’re currently rocking an iPhone and either of today’s new foldables has your interest piqued, you’ll be able to carry all of your data along for the ride without relying on Google Drive or iCloud.

There is some confusion on when exactly this feature will expand to all Android devices — WhatsApp itself says it’s coming to Samsung devices running Android 10 or higher in the coming weeks — but once all phones are supported, you can swap back and forth between operating systems without losing your data. According to the company, the encryption built into the app has kept a transfer function from working until this point, but collaboration between “the world’s largest operating systems and mobile manufacturers” has made it possible to avoid OS lock-in. 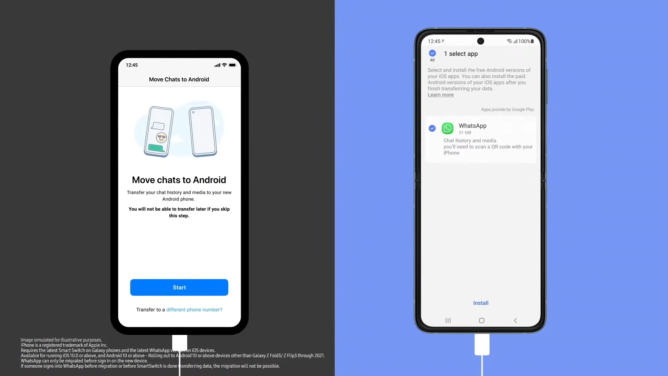 Thanks to leaked beta versions of WhatsApp, we’ve known this feature has been coming for a while. We’ll need to wait until it’s available for all phones to give it a shot, but if you know someone who’s dying to upgrade from an iPhone to the Galaxy Z Fold3 this fall, this is the news they’ve been waiting for.